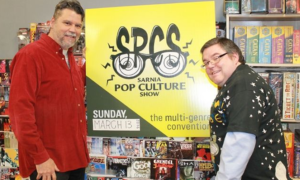 SPCS is a one day, multi-genre, all-ages convention. Open to everything fun and fan-related with an emphasis on comic books, games and cosplay!

Currently, we’re working on a schedule of convention programming with game demonstrations and a costume contest, so check back often for all the latest news and announcements! 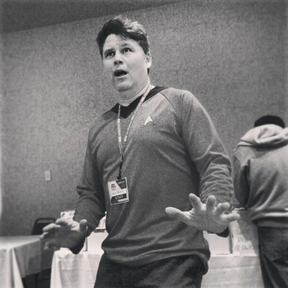 Trent Rogers has been the proprietor of Future Pastimes in downtown Sarnia since July of 1992 and he has wanted to have a convention in his hometown almost as long. His favourite comic book series is Dave Sim’s Cerebus the Aardvark but his tastes are voluminous and eclectic running the gamut from Uncle Scrooge to Marshal Law. The first convention he attended was Con-Version in Calgary in 1984 and he’s been to too many to count since. He also likes to talk about himself in the third person.

Terry Wardell works for OLG but he’s a slave to comics. He got the bug early when the Super Friends cartoon led him to the paper stuff. He quickly latched on to The Flash who remains his favourite character to this day. Through Flash he discovered the Justice League with all the great DC heroes. Perusing the comic racks led him to try a couple of Marvel comics – Spectacular Spider-man and another all-time favourite – Dazzler.

He says, “I still remember the awe i had in 1977 when i was able to see Star Wars. Other benchmark moments include Battlestar Galactica on TV and reading The Chronicles of Narnia followed by The Hobbit. I am only one of millions who have been pulled in to the wonder and amazement of these loved iconic tales but the impact and desire to always be able to go back to them meant I would have to own and keep them.”