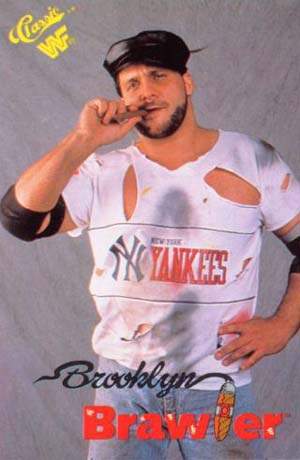 SPCS is very pleased to welcome professional wrestler STEVE LOMBARDI, THE BROOKLYN BRAWLER. The WWE’s longest-serving active wrestler, Steve Lombardi was an over 30 year veteran of the organization. He made his TV wrestling debut in 1983 in a match with The Iron Sheik. Lombardi competed in hundreds of matches through the 80’s under his own name before introducing his popular Brooklyn Brawler persona in 1989 under manager Bobby “The Brain” Heenan. In the 1990’s the Brawler wrestled warm-up matches at huge events such as Royal Rumbles, Summer Slam and several WrestleMania events. Lombardi was often called upon to help usher new talent into the WWE in their early matches including Dwayne “The Rock” Johnson. In 1997 the Brawler won a 20 man battle royal for a title shot against WWE Champion Shawn Michaels. Other Lombardi characters over the years include MVP, Doink the Clown (4), The Red Knight and Kim Chee (handler for Kamala the Ugandan Giant). Lombardi semi-retired from wrestling in the late 90’s and began working primarily as a road agent for the WWF, though his occasional ring appearances have continued until as recently as last year. His accomplishments also include championship titles in several independent wrestling Organizations such as NWA and Border City Wrestling.